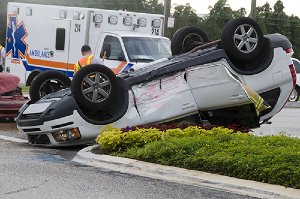 Spring has sprung, baseball is in full swing, and the latest installment of the Gerstner Adam Law Blog is here. In most states, a person injured in an auto accident typically will not receive any compensation from the at-fault driver’s insurance company until final settlement. In this post, we’re going to discuss a unique aspect of Montana law that requires insurers to advance pay certain expenses prior to final settlement. Imagine that Always Right Ron is driving down Broadwater Ave. with his wife Consistently Correct Colleen in the passenger seat. Like always, Ron and Colleen are arguing like crazy. The fights can get escalated, given that both can never concede that the other spouse may be right for once. On this particular day, Ron and Colleen are arguing about whether a hot dog is a sandwich. To settle the dispute, Ron and Colleen agree to allow a game of rock, paper, scissors to determine the answer. When Ron takes his hands off the wheel to play, the car veers off the road and onto the sidewalk. Pedestrian Paul is mowed down by Ron’s car. Paramedics rush Paul to the ER, where he undergoes multiple surgeries and a multi-day stint in the hospital. When Paul is discharged, he faces months of rehab and the possibility of future surgeries. Ron has lots of liability coverage, while Paul has no applicable car insurance coverage. Keep in mind that every case is different. Sometimes, an injured party should wait to settle her personal injury claim until she is healed or has recovered to the best she could reasonably expect to recover. You only have one chance at settlement, and depending on the circumstances, you don’t want to settle your auto accident claim until you’re almost certain that future damages won’t pop up. For that reason, we sometimes wait months before discussing settlement. During those months before settlement, what happens to your mounting medical bills or lost wages? Your medical providers typically don’t want to wait to receive payment. In addition to potentially thousands of dollars in unexpected medical debt, you may be out of work for awhile and losing out on income that you were planning on receiving. Luckily for Montanans, we have laws that require insurance companies to making certain payments in advance of final settlement in certain circumstances. The Unfair Trade Practices Act (“UTPA”) helps govern the relationship between car insurance companies and injured victims. Relevant here, the UTPA requires insurers to act in “good faith to effectuate prompt, fair, and equitable settlements of claims in which liability has become reasonably clear.” In addition, insurance companies cannot deny prompt settlement of one portion of an insurance claim to “influence settlements under other portions of the insurance policy coverage.” In 1997, the Montana Supreme Court decided the seminal case Ridley v. Guaranty Nat'l Ins. Co. In Ridley, the Court determined that the above-quoted portions of the UTPA require an insurance company providing liability coverage to pay the injured person’s medical expenses prior to final settlement if liability is reasonably clear. In other words, if it’s reasonably clear that an insured driver caused a car accident, the driver’s insurance company can be forced to pay the injured person’s medical bills as they are accrued. Receiving an advance payment does not impact the ability to later enter into a final settlement for other damages. The Montana Supreme Court clarified in Dubray v. Farmers Ins. Exch. that insurance companies must also advance lost wages incurred as a result of an auto accident if liability is reasonably clear. This aspect of Montana law is unique in the country. It can help protect injured parties from financial ruin while waiting on final settlement. Going back to Pedestrian Paul, he’s in a financial world of hurt. He’s been unable to work, and he’s receiving the medical bills from his surgeries and stay in the hospital. Paul has consulted with an attorney, and it’s advisable to not approach final settlement until after he completes his months of physical therapy. Under Ridley, Paul can demand that Ron’s insurance company pay his medical bills and lost wages in advance of final settlement. Rather than going deeply in debt, hopefully, the advance payments allow Paul to stay afloat until he can get back on his feet. Like I mentioned before, every case is different. Sometimes Ridley doesn’t apply, and other times it may be advisable to not wait long before settling a case. If you’ve been injured in an auto accident, you need an experienced personal injury attorney to evaluate your situation. Contact Gerstner Adam Law if you need help or have any questions after you’ve been injured.